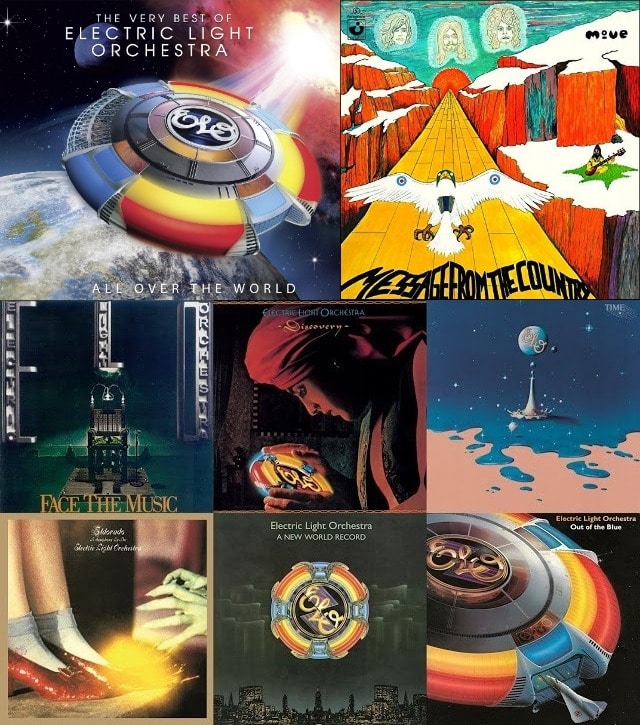 How do you pick your favourite Electric Light Orchestra songs when there are so many fantastic tunes to choose from? It’s never going to be easy, and it’s definitely very subjective.

Well, we’ve given it our best shot, along with some reasons the songs were picked.

Let us know what your favourites are and why, and if your favourite ELO song isn’t currently included in the ELO Encounter tributes band’s live show we’ll do our best to include it.

The fact that it’s so difficult to pick favourite ELO songs is a testament to the fantastic music of ELO and the writing skills Jeff Lynne, so many brilliant songs to choose from, we’re spoilt for choice.

If you would like to see these and many more ELO classics performed live, come along to one of ELO Encounter’s live tribute shows, you won’t be disappointed, TOUR DATES.

Kicking off our list is “Rockaria!”, an energy filled rock and roller from 1976 that features the Operatic talents of Mary Thomas. When played live, ELO Bassist Kelly Groucutt provided the glass shattering intro vocals, a mantle which has been taken up by our own bassist Simon Rownes (Although he does have to wear tight pants to get up there!)

Along with Mr Blue Sky and Don’t Bring me Down, Turn to Stone forms the triad of ELO Songs featured in Dr. Who, and what a song! A fusion of rockabilly guitar, Moog synth bass, high speed vocals, and a cacophonous crescendo make this one of ELO most recognisable songs.

A perfect title if ever there was one, this sun-kissed soundscape perfectly evokes a melancholy daydream of loves lost and days gone by. Beautiful.

Bursting out of ELO’s 1979 Album “Discovery”, this high energy floor filler showed an as yet unseen side of ELO, and showcases Jeff Lynne’s amazing talent of reinvention and continued relevancy.

An epic intro and pithy dystopian lyrics complete “Here is the News”. Released in 1982 as a single from the 1981 concept album Time, this Numan-esque synth-romp forms part of the story of a man kidnapped by time travellers and shown the horrors of the future so that he may prevent them in his own time.

Yes, you knew it was going to be on here. What can be said about this Beatlesque symphonic composition that hasn’t been said already? Do yourself a favour and stick it on while driving on a summer day and let the good times roll.

The greatest piano riff in history! Clocking in at number 4 is ELO’s first ever worldwide hit. Originally intended as filler for Face the Music, this song was written in a mere 30 minutes.

Described by Jeff Lynne as “…a great big galloping ball of distortion”, this was ELO’s highest charting US single. A Back to Basics style track, it was one of the first ELO songs to completely forgo the use of strings. Bruuuuuuuce!

Beatlesque to the extreme! A great tune from ELO’s early days, Nightrider perfectly encapsulates Jeff Lynne’s and Roy Wood’s original vision of “I Am the Walrus” style symphony-pop. John Lennon described ELO as “Son of Beatles” in 1974, saying they were defiantly picking up where they left off – and with this song it’s not hard to see why!

Being the closing song on an album as legendary as “Out of the Blue” is no easy feat, and yet Wild West Hero, with it’s combination of barrelhouse piano and Jeff Lynne’s masterful heart wrenching vocals perfectly paints a tale of a simple man wishing for the grandeur and heroics of the old wild west.

What are your favourites?

Hope you enjoyed our list of top 10 favourite ELO songs. We’re sure you’ll have your own list of favourites, we’d love to know what classics we’ve missed off and why you think they should be in the top 10.